Employment law catching up with science GINA: The Genetic Information Nondiscrimination Act Of 2008 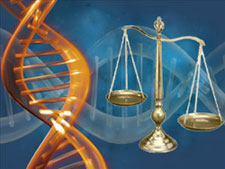 With developments in the field of genetics, the decoding of the human genome, and advances in the field of genomic medicine, genetic tests now exist that can inform individuals whether they may be at risk for developing a specific disease or disorder. However, as the genetic field advanced and individuals participated in genetic screenings, tests, or research, public concerns arose over such issues as how an employee’s genetic information could be used, or misused, by health insurers and/or employers in making decisions relating to health coverage or employment. GINA addresses these concerns.

“No one should be denied a job or the right to be treated fairly in the workplace based on fears that he or she may develop some condition in the future.”
Acting EEOC Chair Stuart J. Ishimaru

GINA and other employment laws

Title II of GINA does not preempt any state or local law that provides equal or greater protections from employment discrimination and does not limit the rights or protections under Federal, state, local or Tribal laws that provide greater privacy protection to genetic information. GINA does not affect an individual’s rights under the ADA, the Rehabilitation Act, or state or local laws that prohibit discrimination on the basis of disability.

However, Title II of GINA limits an employer’s ability to obtain genetic information after making a job offer. Although the ADA permits employers to obtain family medical history or conduct genetic tests of job applicants once an offer of employment has been made, Title II of GINA prohibits employers from doing so. Also, Employers should be mindful of GINA’s confidentiality requirements when requesting genetic information (under one of the permissible exceptions) for FMLA or ADA related purposes.

Employers should do the following:

On November 19, 2009, the U.S. Immigration and Customs Enforcement (ICE) announced the issuance of Notice of Inspections (NOIs) to 1,000 employers across the country associated with critical infrastructure, stating “ICE is focused on finding and penalizing employers who believe they can unfairly get ahead by cultivating illegal workplaces.” ICE Audits are one of the most important administrative tools in building criminal cases and bringing employers into compliance with the law to combat the problem of certain employers hiring an illegal workforce.

On July 1, 2009, 654 businesses nationwide were served with Notice of Inspections (NOIs) indicating that ICE would inspect their hiring records (Form I-9) to determine whether they were in accordance with the employment eligibility verification laws and regulations. The businesses presented with the NOIs to Audit Form I-9 were selected as a result of leads and other information obtained through other investigative measures. This was the first step for ICE in its nationwide plan to promote compliance with the employment eligibility laws through an effective I-9 Audit system.

Audits involve a comprehensive review of Form I-9s. Form I-9 must be completed and retained for each new hire. The form requires the employer to review several personal identification documents of the new hire (i.e., passport, permanent resident card, employment authorization card, driver’s license, birth certificate, military id, etc) and to determine the genuineness of the documents.

If you are interested in conducting an internal I-9 audit to ensure your company’s compliance with the employment eligibility verification laws and regulations, contact our firm today.

The U.S. Equal Employment Opportunity Commission has released a new version of the “Equal Employment Opportunity is the Law” poster that must be displayed by all employers. The poster identified current federal laws dealing with employment discrimination as well as information on the newly applicable Genetic Information Nondiscrimination Act of 2008 (“GINA”).

Employers can obtain the revised “EEO is the Law” poster as follows:

Penalties may be imposed for failure to display the required posters.

Addressing an issue on which appellate courts are divided, the Ninth Circuit Court of Appeals held that Section 504 of the Rehabilitation Act of 1973 extends to discrimination claims brought by independent contractors (and not just employees). On November 19, 2009, in Fleming v. Yuma Regional Medical Center, 07-16427, the Ninth Circuit agreed with the Tenth Circuit Court of Appeals holding that the Rehabilitation Act covers discrimination claims by independent contractors notwithstanding the lack of an employer-employee relationship.

The Sixth and the Eighth Circuits previously reached an opposite conclusion, holding that only employees have standing to sue because they reasoned that the Rehabilitation Act incorporated Title I of the Americans with Disabilities Act in its entirety, requiring that the person filing suit to be an actual employee. The Ninth and Tenth Circuits disagree, concluding that Title I is incorporated selectively and, therefore, allows independent contractors to sue under the Rehabilitation Act.

The Rehabilitation Act of 1973 prohibits discrimination and requires employers with federal contracts or subcontracts that exceed $10,000 to take affirmative action to hire, retain, and promote qualified individuals with disabilities. All covered contractors and subcontractors must also include a specific equal opportunity clause in each of their nonexempt contracts and subcontracts. Section 504 provides a private right of action for individuals subjected to disability discrimination by any program or activity receiving federal financial assistance, including employment discrimination is such program.

This law is enforced by the Employment Standards Administration’s Office of Federal Contract Compliance Programs (OFCCP) within the U.S. Department of Labor.

The major split within the Circuits creates an issue of concern for employers in the remaining Circuits, including the Eleventh Circuit (which covers Florida’s federal courts). Employers participating in any program or activity receiving Federal assistance should be aware of this recent opinion when making decisions related to individuals (employers and independent contractors alike). If you have any questions or issues, contact our firm today.