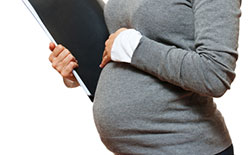 The Florida Supreme Court handed down its long-awaited decision in Delva v. The Continental Group, Inc., No. SC12-2315 (April 17, 2014), holding that the Florida Civil Rights Act (“FCRA”) should be interpreted as prohibiting pregnancy discrimination as a form of discrimination against women because of their gender. By this decision, pregnant women can now invoke the statutory and administrative protections afforded by the FCRA and file suit in state court rather than be relegated to filing in federal court only (some practitioners believe that employees have a better chance of having their cases reach a jury in the state court system).

Over the last few years, it appears that more young women in the workforce unafraid to assert their rights have increased the filing of pregnancy discrimination claims (which, up until now, have been recognized only under the federal Pregnancy Discrimination Act and filed in federal court). Employers should be cognizant of the rights of pregnant employees and comply with their legal obligations in the workplace.